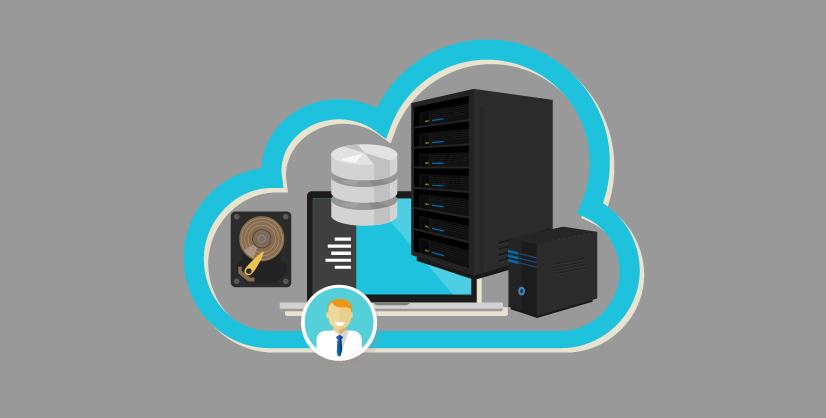 Storage as a Service (also known as Public Cloud Storage) is an essential part of current business and enterprise-level data storage. Designed with developers and application hosting in mind, its appeal has grown over time, with providers now catering not just to developers, but also to businesses and individual users, and providing the infrastructure required to backup, archive, and analyse vast quantities of information using big data services such as Hadoop. 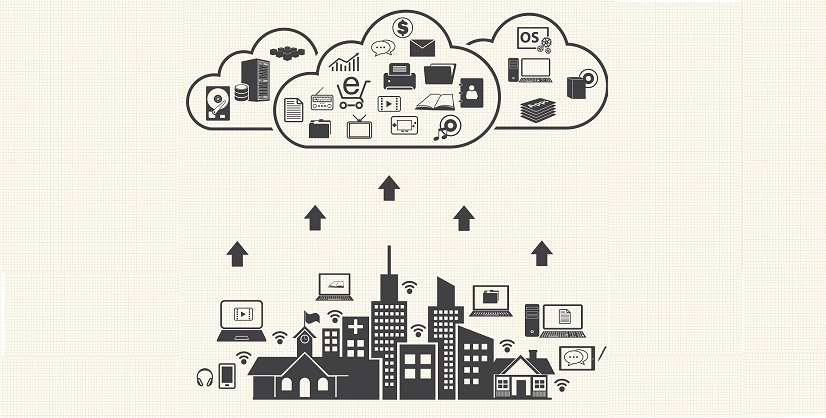 Dominated by tech giants including Google, Microsoft, and Amazon, Storage as a Service is now starting to gain popularity with users across the board, and looks to be shaping the future of Cloud-based data storage.

What is Storage as a Service?

Storage as a Service (SaaS, though not to be confused with Software as a Service) is the umbrella term used to refer to services such as Amazon S3, Microsoft Azure, Google Cloud Storage, Rackspace Public Cloud, and Backblaze B2*, which utilise a pay-for-what-you-use billing system, and allow individual users, developers, businesses, and enterprise-scale companies to rent out storage space and run applications from their servers.

The major difference between these storage services and online backup providers like Dropbox and Carbonite is that S3, Azure etc. really just offer the raw storage space, without much by way of consumer-friendly navigation features built in. As a result, in order to utilise Storage as a Service if you’re not familiar with processes like using a command line interface, you’ll need to find a platform that parcels up the storage space with some additional usability features – which is exactly what programs like Dropbox are offering.

So why are we even talking about Storage as a Service?

The low price point of SaaS services has led to a rise in popularity amongst individual users looking to store large quantities of data online, and new user interface services have sprung up to make the process more accessible to the casual consumer. These services, which include CloudBerry Backup, S3 Browser, and Bucket Explorer, are typically free – or at least significantly cheaper than paying a monthly fee to use an online backup service like Dropbox.

*Please note: With so many SaaS services on the market, it would be extremely time-consuming for us to write (not to mention very time-consuming for you to read) about them all in an introductory guide like this one. As a result, we’ve stuck to the big three services (Amazon S3, Microsoft Azure, and Google Cloud Storage) to give you a good idea of the most common practices – though of course, we strongly advise that you do your own, more in-depth research before signing up for anything.

Pros and cons of SaaS

Only pay for what you use

When you sign up to services like Dropbox, you’re paying for a maximum storage allowance, rather than the number of gigabytes that your data is actually taking up. This means that, if you’re paying $11 per month for a 1TB storage account but are only using 250GB of it, you’re effectively also paying for an extra 750GB of empty space.

By contrast, SaaS services will only ever charge you for the space you’re actively using. You don’t need to estimate or plan your usage in advance – just add and remove data as required, and pay accordingly.

While lots of other backup services have a hard cap on your storage quota, or start charging astronomical monthly fees for custom extensions to your account, Storage as a Service systems really do offer unlimited storage space. We’re not just talking terabytes here – Amazon S3, for example, won’t even raise an eyebrow if you want to stray into petabyte territory.

While there’s no denying that Storage as a Service is cheap, paying for it is not quite as simple as it seems on first glance. While most online backups charge for storage space alone – occasionally with a few paid add-ons available too – using SaaS will require you to not just pay for your storage space, but also every time you want to retrieve any data or grant access to other users.

While the charges are still fairly minimal, getting your head around all of these different fees can be confusing to start with, and many users have found themselves with larger-than-anticipated bills at the end of the month as a result. Don’t get us wrong – there’s nothing fundamentally wrong or untrustworthy about the SaaS pricing model. Just make sure that you do your research first.

As mentioned above, SaaS services aren’t really designed with the casual consumer in mind. So although basic processes aren’t too hard to master, they’re not what you’d call intuitive; and more advanced features will definitely require a bit of tech knowhow (or a subscription to a user interface service) if you want to use them to best effect.

Understanding Storage as a Service Pricing

Pricing for Storage as a Service is often more complex than it initially appears as, alongside variable storage fees, there are almost always other charges involved too.

Charges for data stored using Storage as a Service providers are subject to several influencing features. 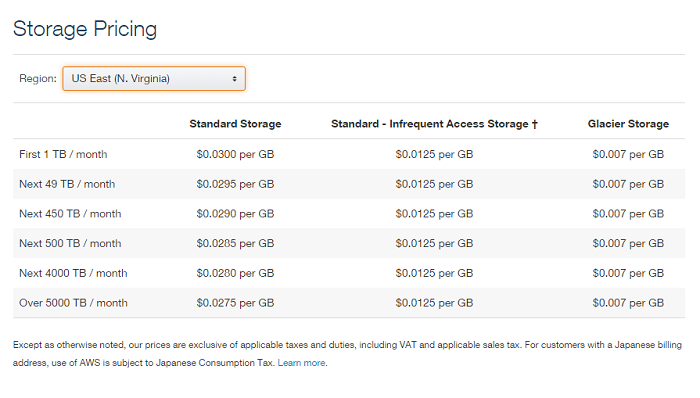 Many providers alter storage prices depending on the location at which you choose to store your data. For example, if you’re purchasing S3 Standard Storage, keeping your files on servers in Seoul  will cost $0.0314 per GB per month, while the same service with data stored in North Virginia will cost $0.0300 /GB.

Prices can also vary depending on the frequency with which you want to access your data. In the case of Amazon S3, this takes the form of two alternative accounts – Standard (prices starting at $0.03 per GB per month) and Infrequent Access (from $0.125 /GB per month).

Having stored your data on SaaS servers, you’ll need to pay to get it back. Depending on which service you use, data transfer fees may be fixed or variable – in the latter case, depending on factors including how quickly you want the download to take place, and how long it’s been since the data was uploaded.

Providing others with access to your files (typically via a URL) is a useful tool for managing access and storage within the same service – but once again, there’s a cost. In this case, it’s usually a low one (S3 charges as little as $0.004 per 10,000 GET requests), but if that’s a big part of your plan for utilising the storage space, then it’s worth taking into account.

Some services, including Microsoft Azure, offer add-ons (‘modules’) which contribute to your monthly charges. These range from analytics tools to domain hosting and provisioning for virtual machines, and can range from just a few dollars per month to several hundred.

As mentioned above, pricing for SaaS is always changing – and there are plenty of good deals out there to take advantage of too. In most cases, these take the form of a trial – offering free or discounted storage up to a certain amount (usually at least 100GB) or for an initial time period.

Are Storage as a Service Providers Secure?

As with the majority of features, data security measures vary between providers – but some basic standards do exist throughout the industry. In most cases, this takes the form of AES-256 encryption for data held on the company’s servers, and HTTPS/TLS used during transfer.

While some services, including Microsoft Azure, stop at this, others (including Amazon S3 and Google Cloud Services) also offer client-side encryption, and the option to manage your own encryption keys. The risk here is that, if you lose your password, you won’t be able to regain access to your data – however, if security is your top priority, it’s worthwhile nonetheless.

For those seeking a more advanced range of security permissions, there are also Enterprise-standard gradated data protection settings on offer from services including AWS. 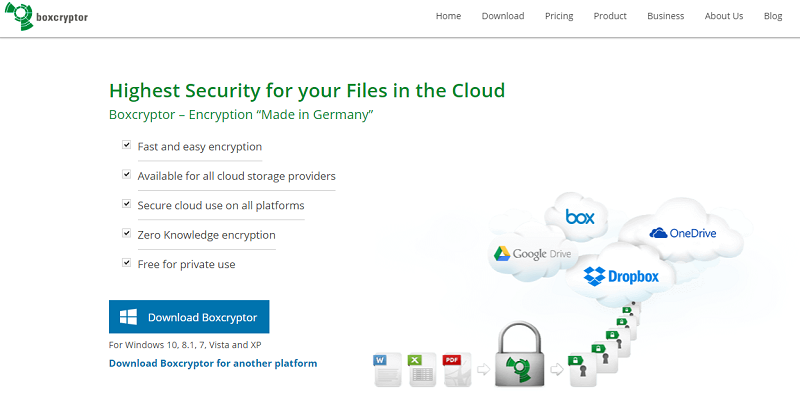 If you’d like further reassurance that your stored data will be kept private no matter what, then almost all Storage as a Service providers support the upload of files that have been previously encrypted using services like VeraCrypt and BoxCryptor.

There are dozens of SaaS user interface services on the market today – some designed specifically for use with one provider (such as S3 Browser and Bucket Explorer), and others compatible with a broad range of services (such as CloudBerry Backup). 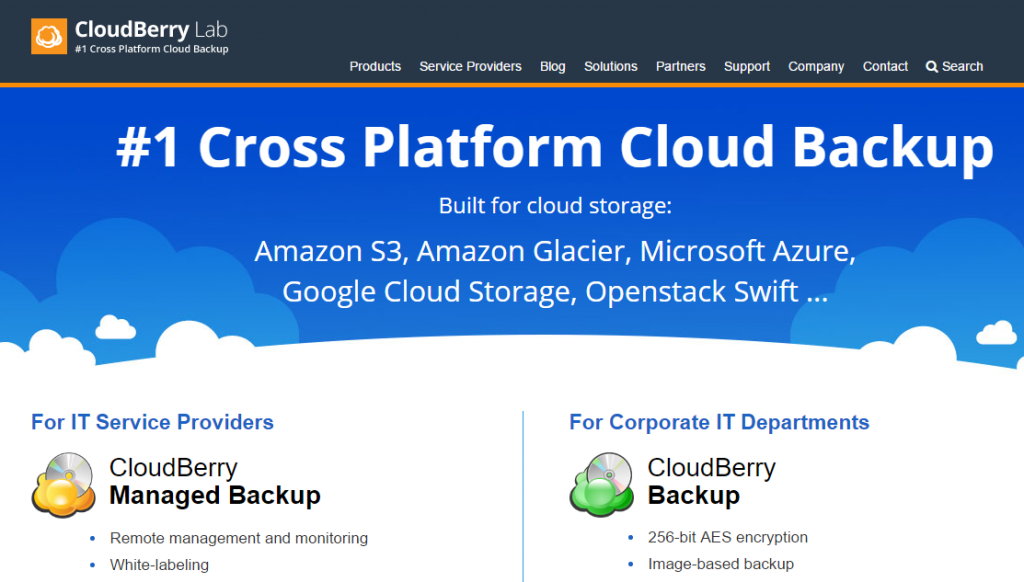 In general, these interface solutions provide a more user-friendly point of access to SaaS, as well as facilitating the easy use of additional features such as the following:

Most of these services are freeware, and many are open-source. Those services which do charge often offer perpetual licenses for a one-off fee – removing the need to worry about monthly charges or renewal costs.

In addition to dedicated Storage as a Service user interface services, you’ll also find Cloud Storage Managers such as Otixo, Jolicloud and CloudFuze. These services are primarily designed to give you a centralised location to manage data stored with multiple providers – including both consumer-level online backup services such as OneDrive and Box, and SaaS solutions – but also offer a user-friendly platform from which to manage your files.

Amazon Web Services is (as you might expect) a vast enterprise, spanning multiple services, from data storage to hosting and beyond.

When it comes to online backup and SaaS, however, there are just two facets to consider – Amazon S3 and Amazon Glacier. So what’s the difference between the two?

Amazon S3 is much like other online backup services insofar as it’s designed to be constantly updated with new and changed files, and facilitates regular requests for access to your data. Of course, as mentioned above, it’s designed with enterprises and developers in mind – so you’ll find plenty of other features there too – but for the purposes of comparison, it’s a day-to-day storage solution for any files that you may want to download, share, amend, or access at short notice.

Amazon Glacier acts primarily as a low-cost archiving service – giving users a place to store data that won’t be accessed for months, or even years, at a time. With prices starting from as little as $0.007 per GB per month, it’s one of the cheapest data storage options out there – but you’ll be charged much higher rates if you attempt to retrieve recently-uploaded files. In addition to this, there is also a minimum waiting time of four hours for file retrieval – making it inconvenient as well as expensive to use if you’re seeking frequent access to your data.

As one of the major forces in Cloud Computing today, there’s an awful lot to be said about Storage as a Service. In this guide, we’ve set out to provide a basic introduction to how SaaS fits in with other online backup services, and the main strengths that it has to offer. For more in-depth information, the best place to go is the providers’ own websites – but watch this space for more!