While this means a cheaper service for customers using 50GB or less, all other subscribers (both old and new) will be getting less for more, as the $7.99 per month that would previously have bought them unlimited storage space now buys just 100GB, and larger plans have become significantly more expensive.

While there’s a strong argument for these account changes on the basis that the majority of SOS subscribers are paying for space that they don’t need, they’re still an undeniable blow to users that originally chose SOS unlimited backup precisely because of its uncapped storage capacity. 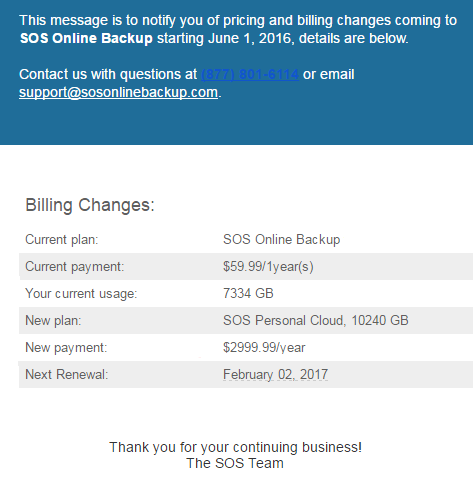 Although there’s still a generous amount of storage space available in the new plans (up to 10TB), larger data allowances have been given rather hefty price tags – the most expensive of which will set you back $299.99 per month – a far cry from the service that many people originally signed up for.

So why has this happened?

SOS unlimited backup isn’t the first service to fall as providers change their minds about storage plans, with companies including Bitcasa and Mozy making high-profile alterations in recent years. As a result, personal Cloud storage plans now tend to feature a noticeably narrower range of different subscriptions, with pricing based on storage space, larger storage allowances available for higher prices, and unlimited storage slowly being phased out.

It’s not all bad news for those with lots of data, however, as long-standing industry giants like Backblaze, CrashPlan and Carbonite continue to offer unlimited plans – the question is, for how much longer?

To better understand the reasons behind this new approach to personal backup plans, it’s worth looking at the increase in popularity of public Cloud storage services like Amazon S3, Microsoft Azure, and Backblaze’s own B2.

These programs, which offer pay-per-GB storage for as little as $0.005 per gigabyte per month, are aimed squarely at businesses, as well as personal users with significant amounts of data; providing a much more cost-effective storage solution to a demographic that have previously been confined to pricier unlimited storage plans.

Although they’ve been around for a while, providing data storage to enterprise and small business users, public Cloud storage services are now entering the personal market thanks to new interface tools like CloudBerry and S3 Browser that make managing accounts much simpler.

Whether this is a case of rising to fill a gap in the market or pricing existing services out of the market is a somewhat contentious issue, but with unlimited storage plans increasingly considered financially unsustainable by backup providers, it certainly appears that the pricing model used by traditional online backup providers is less suited to data-heavy individuals than that of public Cloud providers.

So far, backup providers seem to be graciously conceding defeat and choosing to focus their efforts elsewhere rather fighting the behemoths like Google, Amazon and Microsoft that are behind their most popular competitors – how this will affect the backup market in the months and years to come remains to be seen.

AWS, Azure and Beyond – a Basic Guide to Storage as a Service
bool(true)